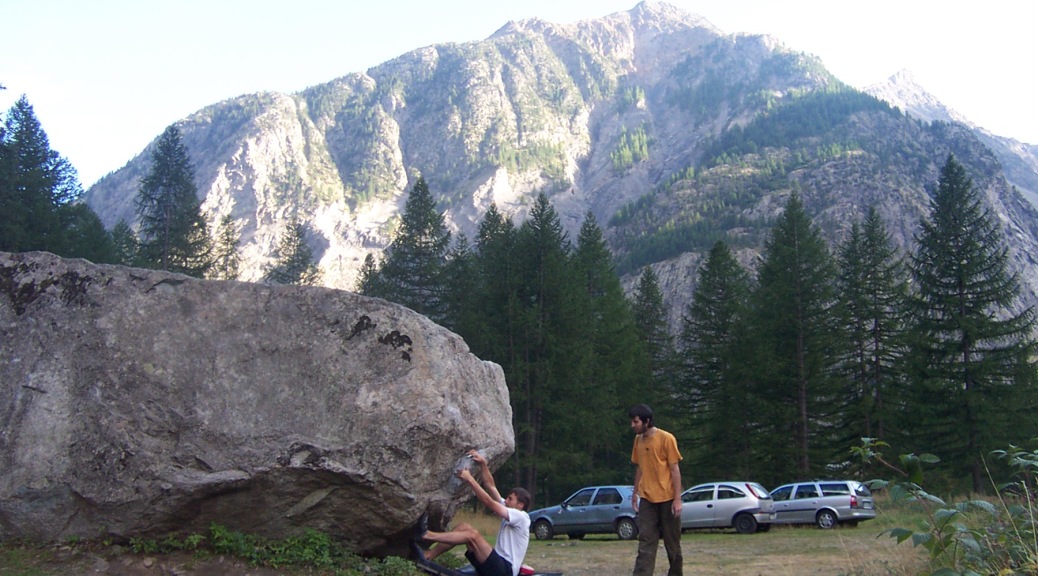 This was my first foreign climbing venue, back in 2005 with Mad Jim and his friend Sean. They’d been once before and raved about it, spending the entire build up telling me how amazing it was. If i’m honest I wasn’t sold at first but it did grow on me

The following year was the Big Bouldering Tour, or whatever we called it back then, which took in my debut trip to Font, then South to Ailefroide, before heading to Cresciano in Switzerland. I can’t remember whether I was really excited about it or if I was just saying it to try and psyche the others up but I think I was well up for it. Thing is, this is one of those places that is fantastic to go back to.

Ailfroide is a small village below Mont Pelvoux and the Pelvoux glacier in the Ecrins region of France. I remember hearing a story that the village empties in the winter as it is entirely covered in snow but never had that verified. What I do know is that this valley, North-West of l’Argentiere la Bessee, is more famed for it’s fabulous multipitch sport climbing and access onto the higher mountains but has some stunning boulders in the valley base. They are scattered around somewhat but well worth exploring to find.

The village doesn’t have much to it but it does have everything you need. Most of the village is actually the campsite, which does allow fires if you don’t go too mad: apparently, making a full size armchair out of wood and string before a ceremonial burning crossed the line somewhat… There are also grocery and climbing stores so no real reason to leave for the duration of your stay! That said, if you do, it’s not really that far to l’Argentiere, with another climbing shop, some nice cafes and some other little shops. Oh, if i remember rightly, it also has a giant ice axe in the village too.

It has been a while (2006 at time of writing) but as I write this, there is a kind of yearning to go back. Apparently the guidebook has been redone, and is now much better with much more to go at, and is available from any of the climbing shops in the village.

All the climbing can be accessed walking from your tent although some of the areas at the top of the valley would possibly warrant driving. I’ve got to be honest and say the area has been developed considerably since i was there last, so the info that follows should give you a bit of an insight. It really is better than it sounds though, and should be on every international climber’s hitlist at some point. Okay, it doesn’t have as much as Font, and probably isn’t of the quality of some of the other top Alpine venues but it is certainly good enough to hold a small bouldering festival and the atmosphere of the village is hard to beat anywhere.

I’m not near the guide at the moment and can’t remember the different areas that well. I will come back to this page at the earliest convenience.

This site uses Akismet to reduce spam. Learn how your comment data is processed.

A home for European bouldering reviews and info

What’s been going on lately

I know @sallylizzle (who took this amazing photo of me on El Plus de Autobus 7b) has already shared this but I love it so much I couldn't do anything but share it too. I typically climb alone so rarely get photos of me climbing and I am made up with this almost as much as the send. . . . . #Spain #spanishbouldering #albarracin #bouldering #bouldering_pictures_of_instagram #rockclimbing #grimpeur #escalada #escalade #Climbing #climbing_photos_of_instagram #climbing_is_my_passion #climbinglife
%d bloggers like this: