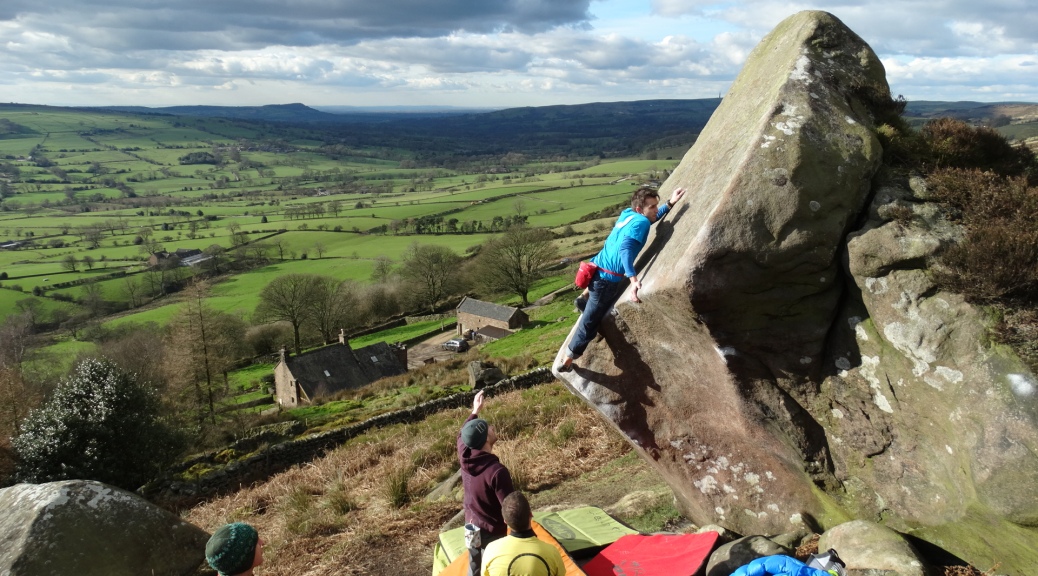 I cannot find exactly where i first said about it but somewhere on here, i mentioned about the 1st January being poor as a climbers New Year. It’s right in the middle of the mid-winter season and your goals and objectives should be squarely in place and on the go by then. Maybe a quick review but resolutions for the year ahead? No, not now, just keep training.

The time to set your next goals and objectives is now: the weekend the clocks change. Twice annually, it’s the right time to assess where you’re at and plan for what’s coming. So in that spirit, here goes:

Since this time last year, so much has changed it’s hard to imagine! Having just returned from a frankly poor trip to Font, the first ascents continued to come with Fluffion 6a+, OGYDd 6c+ and culminating in my crowning achievement: Prowess 7b. Around that time i’d also managed to step my game up a bit with an ascent of Bus Stop 7b+ in the Llanberis Pass. This was also quickly followed by Ultimate Retro Party 7b to keep the trend coming.

A monumentous day yesterday when, after several sessions of sustained effort, i finally ticked my best #firstascent #Prowess and gave it 7b+ (needs confirmation). Needless to say, i'm #stoked #psyched and #thrilled. Big thanks to Niels, Karen and especially Jimbob for their spotting, help and support. #bouldering #climbing #rockclimbing #northwales #northwalesbouldering #petzlgram

Then followed the best trip to date: Magic Wood 2015. Perfect conditions, vibrant scene and some hard ticks! Intermezzo 7c, Dinos Don’t Dyno 7b and Bosna Genial 7a flash to name a couple of highlights marked my most successful trip since Font 2014 and my Carnage tick. I came back buoyed and psyched.

Making the leap on #dinosdontdyno at #magicwood – best dyno ever, utterly astounding, so #stoked! Could stay for a lot longer #bouldering #climbing #rockclimbing

And that kicked off a summer of relentless success: Fish Skin Wall 7a+, The Pinch 7a+, Original Traverse 7b on the Brenin Boulder, The Gimp 7b even a flash of Wavelength (stand start) 7b+ as now graded in the new guide. The introduction of The List this time last year inspired me to get out at every opportunity and gave me the focus and autonomy to be able to narrow it down to the best possible option, with the last hard tick of the year being Love Pie 7c.

Stonking #session at #rhiwgoch this evening on an #afterworksession nailed three great lines and almost ticked the classic #moria 7b but was chased off by darkness. Here, @alexcutbush tries #gapofrohan 6c -the first in s series of great lines on this face, one after another. A great little find, thoroughly recommended crag #bouldering #climbing #rockclimbing #climbing_photos_of_instagram #climbing_pictures_of_instagram @climbing_pictures_of_instagram @petzl_official #petzlgram #northwalesbouldering #northwales #snowdonia @menofoutdoors

A dry spell followed Fredrik’s visit at the end of October (while it rained relentlessly) and so i got training in the wall, competing in the Indy Aggregate once again but not wholeheartedly as i was also training in the Mill and at Work. Oddly, the host of potential venues meant i actually did a lot less than i otherwise would but that didn’t seem to matter once i finally got out again.

February came and with it dry rock and fresh enthusiasm. Save for the occasional day (to tick Popcorn Party 7a mainly after many years) i hadn’t really been out since October so when i finally could, the List took a big hit. Johnny’s Problem 7b in the Pass, the Witches Knickers 7b and Toe Dragon into Kingdom of Rain 7b all fell within the month but the best was yet to come. Nearly two years after my first 7c, and five mixed sessions, i cracked the next grade: Jerry’s Problem V10 at Sheep Pen.

Giving it beans yesterday on #jerrysproblem at #sheeppen. Session 3 on this one and I stuck the first two hard moves fairly quickly, much to the surprise of the excellent crew surrounding me. Sadly it didn't go and despite dry #rock this morning, and a repeat to try and keep the momentum going, it again eluded me. With rain falling this afternoon and another day off not until a week Thursday, it's not looking likely to be going any time soon. Still, it's not going anywhere and the weather is starting to turn… Photo credit to @michelle.l.wardle and top marks for capturing a great move with a great shot #northwales #northwalesbouldering #bouldering #rockclimbing #climbing #climbing_is_my_passion #climbing_pictures_of_instagram #climbing_photos_of_instagram

Until i just wrote that, i didn’t realise how long i’d been on 7c as a top achievement and now, it seems silly as i’ve already been working on my first 8a! Which brings us to the next section.

Put simply, it’s carry on as before and try to keep ticking them off The List… although thinking about it, adding the goal of “try and stop going on about the List” may not be a bad one too!

I’d quite like to concentrate on the four that remain from the inaugural version: Shocker 7b in Beddgelert Forest, Going Down On An Elephant 7b at Elephantitus Cave, Animal Magnetism V8 high above Caseg Fraith and Roof of a Baby Buddha 7c+. The latter has been the last to receive some serious attention and it’s gone well! Just need to bear them in mind during a dry spell.

And then later this evening. At the end of the day, it gets dark. That was always one of my favourite phrases, simply meaning that some things are inevitable. In this case, on the form I'm on, success will come in the same way. Session 1 went well! Just one tricky foot sequence to figure out and the game is on. #betwsycoed #roofofababybuddha #worldclasswales #northwales #northwalesbouldering #bouldering #rockclimbing #climbing #climbing_photos_of_instagram #climbing_pictures_of_instagram #climbing_is_my_passion #meclimbing

Obviously knowing this was coming, i’ve been pondering this and a few weeks ago, i was hoping for my first 7c+ and maybe 8a. With recent developments, this has now changed and now sits at three 8a climbs this season/year.

I’d also quite like to get a 7c abroad. With plenty of opportunities to do this lined up for this year, it should be a distinct possibility, even though it can often take multiple sessions. It’ll take some attention to pick the right one(s) but it’s certainly attainable. If it goes quick enough, maybe 7c+ is also achievable but only time will tell on this.

Look at those arms of a #beast! Simon #crushing #intermezzo 7c, shortly after my own success on the same problem. Best birthday ever! #bouldering #climbing #rockclimbing #magicwood #petzlgram

Finally, i’d like to keep going on the first ascents in Bryn Engan and create a proper topo for everything in the forest. The new guide is looking closer all the time and i’m really hoping that my lines will make the cut. Getting a sufficient circuit may be the key and there’s plenty of projects currently waiting to be cleaned and climbed.

Oh, one more thing. As my coaching develops, i’d like to take this to the next level and the next hurdle will be to obtain my SPA proper. Assessments for the Foundation and Development coach can’t happen until i have a “group management” style award and that’s the most sensible and obvious one to do.

The #autumn is definitely upon us, the ferns are dying off and the leaves are falling which means it's almost time to go #boulder hunting again. As they used to say, there's gold in them there hills! #snowdonia #capelcurig #brynengan #northwales #northwalesbouldering #bouldering #rockclimbing #climbing #climbing_photos_of_instagram #climbing_pictures_of_instagram #woodland #forest

Now that i’ve got into training a bit more and have some substantial facilities, it’s time i actually made proper use of them. Following an end-of-season review of course, the goal would be to train my weaknesses properly, develop my strengths a bit more (something i feel people should probably do a bit more – they’re the bits you’re good at, harness that!) and put some structure in place to be able to do this. It’s something i’ve never done and something that would benefit not only me personally but would be crucial to my development as a coach.

All of these should be perfectly sensible objectives and will push me on the way to being actually quite good. I have ideas in mind for longer term but to put them in place now would be folly – this is enough to be going at for now and thinking too far into the future risks losing sight of the short term goals.

So i’ll leave you with a Best of Psyche! greeting and wishing you all…

A home for European bouldering reviews and info

What’s been going on lately